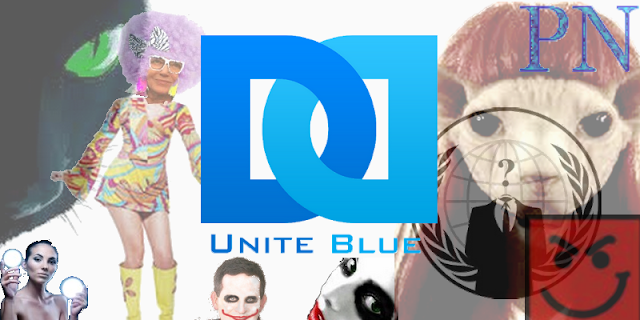 On March 8th, 2013, a very odd, confusing campaign began to destroy the Liberal political group UniteBlue. Called OpUniteBlue, it was started by a few disgruntled members of another group called, ironically, Connect The Left. This group managed to manipulate members of Anonymous to join their battle and collaborated with members of another group called TGDN all in an effort to destroy UniteBlue. And through it all, fanning the flames of this Twitter war, was a group dubbed The Cabal.
OpUniteBlue was not a success, UB members fought back and Anonymous realized they’d been duped into being someone’s personal army for political reasons. Some Anons switched sides. And then… well… it does get complicated.
The story behind OpUniteBlue is an odd one with Liberals, Conservatives and Anonymous working together to expose a network attacking both the Left and the Right. It’s a tale with many subplots twisting and turning around each other with characters that include a psychotic clown, a sociopathic spy,  a crazy cat lady, along with a bunny, a bat and a cat, a prostitute and a pedophile, nodes and ninjahs, lots of LOLs, lulz, trolls and tweets.
Oh yes, thousands and thousands of tweets.
This site is a repository for many of those tweets and screen captures.  We’ll use them to present you the bizarre story of OpUniteBlue as we await a much deserved Happy Ending.

tagged with Anonymous, Connect The Left, opuniteblue, The Cabal, UniteBlue