Alan Rosenblatt gets a Potato Award for misreading his own “evidence”.

@Political_Bill But Simon offers screen snap as evidence he created the ConnectTheLeft account on Aug 22, 2011 bit.ly/YgDkKk

I am Simon (@SayethSimon) and anyone to whom it is important will already know my last name as well as the threats of violence that have been made on me in the past, so I won’t mention it here. If at any point you’d like to know more about me simply let me know, as we all know I have no problem with a conversation between friends or spirited debate.

This letter is to address the brazen inaccuracies, and in some cases outright lies, being floated recently about my early relationship with #ConnectTheLeft and how that was transformed to my support of #UniteBlue. The false storyline goes something like this: I was a “caretaker” for #ConnectTheLeft digital properties at an early stage, and eventually stole these properties to make a handsome profit for myself. These stories paint me as, essentially, a selfish bastard out to make a buck on the back of a hard working progressive activist, @EileenLeft, by turning the “popularity” of these properties into Unite Blue for a profit. Great story, if it were true. However, it is not true. Here are the facts (originals of images and receipts redacted to protect my privacy, but can be provided upon request. Updated images, as well as a PS, on page 2 deal with OsborneInk’s false claims that these are falsified.): 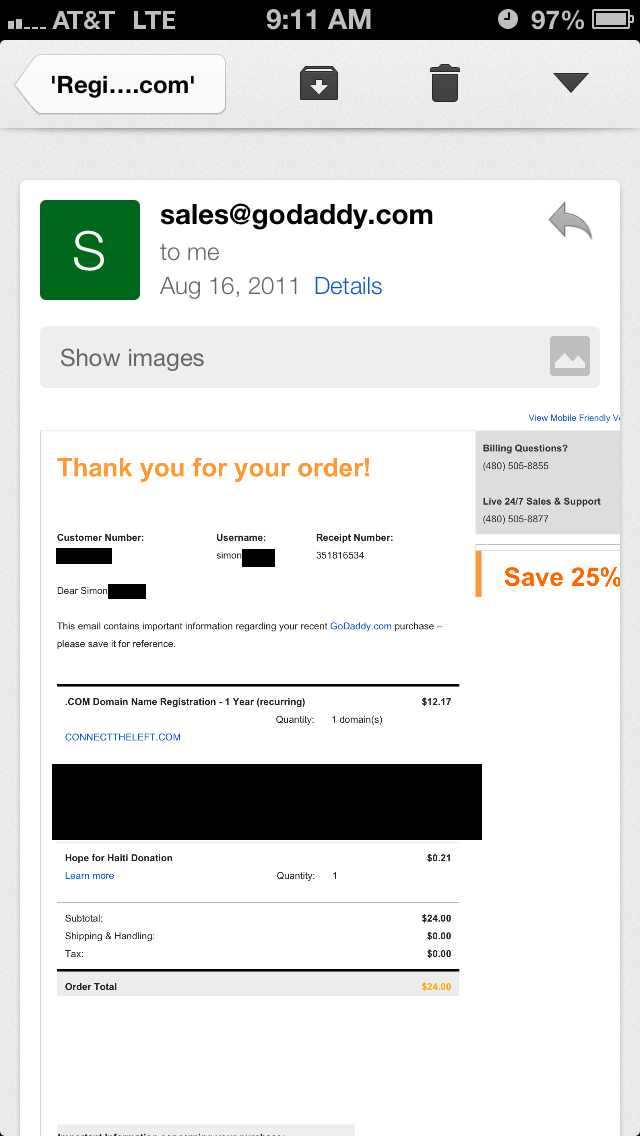 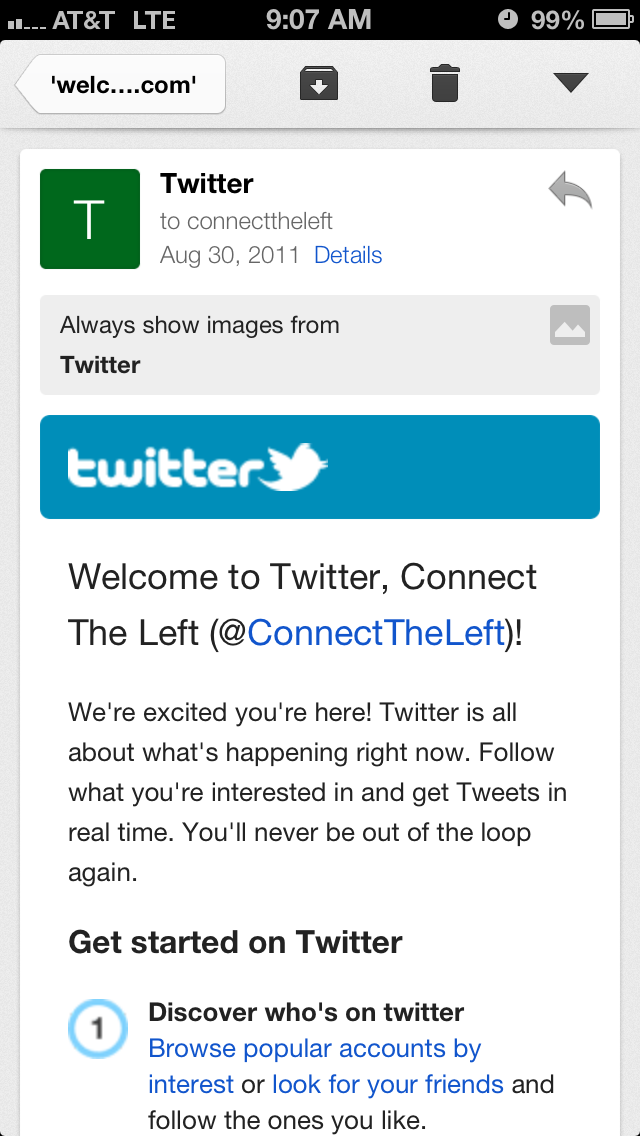 My relationship with 140Elect, beginning somewhere around July/August 2012:

The fact is that I became invested in ConnectTheLeft because I believed in what it could be. As many of you already know I am a fervent defender of the left on Twitter, and have worked as hard as any of us toward our shared goals. I raised over $8000 (thank you to those that contributed!) for The President in the 2012 election cycle, I have done pro-bono work for 5 state campaigns for which I could have been paid thousands but wasn’t, and I contributed heavily to #ConnectTheLeft in it’s infancy, over a year and a half ago. I am now being accused of stealing from them to enrich myself, despite having owned everything that the “aggrieved” now say I stole. Enrich myself? Give me a break, I can barely pay my bills and Unite Blue isn’t paying me a cent outside of what I’ve already described. I actually just believe in this, and most of you know that.

With UniteBlue we have built a movement that has seen participation from the President and Vice President of the United States, connected thousands of progressives on Twitter and empowered them through this community to make our voice heard across this nation. #SaveUSPS was the number 1 nationwide trend, and made it on MSNBC. #GunsKillPeople (proud to have suggested this one) was the number 1 nationwide trend for over an hour, and trended well into the early morning and angered trolls on the right immensely. #LivingWage trended and saw two tweets posted to it by President Barack Obama and the Organizing For Action staff. #WeDemandAVote trended for an entire afternoon and on this occasion both President Obama and Vice President Biden joined the call. With this kind of success it is distinctly clear why some folks want to take credit for starting it. While I am sorry that they have refused to play a credible role in doing so, they have played no credible role in doing so.

Eileen and I tried to work together, or at least I tried my damnedest to do so. I offered my help and thousands of dollars worth of services which she accepted. After spending months working diligently on a website for her, she told me to shut it down, and that it would not be used. Eileen scheduled at least three conference calls with a volunteer team that included me to discuss strategy and moving forward, each time Eileen failed to show up for these meetings and failed to inform anyone she would not attend. Following the third and last of these missed phone calls Eileen proceeded to somehow blame me for making it a problem, instead of being an adult and apologizing for wasting our time as I had asked. For a self-proclaimed organizer, the fact is, Eileen failed to be organized enough to support or build a movement and I moved on and kept the fruits of my labors including the Twitter handle and the domain name.

If Eileen had been at all interested in actually building up the left, we would not be here today. To this day I will congratulate her on seeing a need to better organize our community, but to suggest she somehow is the rightful owner of organizing the left on Twitter is ridiculous. To suggest she was the rightful owner of @ConnectTheLeft and ConnectTheLeft.com is ridiculous, as rights to private property are a core of our constitution. She has not contacted me since the end of 2011, despite claims that she has and her attempts to have been ignored. Both myself and 140Elect have reached out countless times to try to bring her on board, even after they had changed the name, and have been willfully ignored at every turn. When it was clear Eileen refused to work with 140Elect they changed their name and clearly informed folks about the change. Their new name was UniteBlue.

Not only that, upon seeing @EileenLeft listed on UniteBlue’s Defense lists about a month ago I reached out to her asking to reconnect. I tweeted her publicly and was excited to rebuild a relationship that could do no good for anyone as raw enmity, and I was completely ignored. Perhaps if Eileen had reached out even once to ask for the domain and twitter account, I may have given them to her instead. She has not. She has instead pursued a path of publicly bashing my reputation and that of the folks at 140Elect out of a seeming unhappiness with the failure of her own organizing efforts. To her enablers in doing this, I will address you separately.

Eileen, rather than threatening us with your alleged trademark for a name UniteBlue is not using or promoting:

To recap, it is categorically false that you ever owned these items or that I was simply a “caretaker” of them, it is false that you have tried to contact me to “regain” control of them as you have done no such thing at any point, it is false that we stole a userbase from you as it was an account I owned and operated and one that had very few followers. You were too self interested to work together with like minded folks to help build true community, and you never cared about the return of these items before the President started joining into our Twitterbombs in the last month.

So, while I understand your want for these properties, and some recognition for the growing success of the UniteBlue movement, you are not in fact entitled to them. Your property has never been taken, your lists have always been separate and at all times remained in your control (as well you know), and the Twitter account and Domain name were, very simply, never in your possession. You’ve shown so little interest in these properties you haven’t even emailed or called me since 2011, and it seems clear that only when Unite Blue became a popular movement in it’s own right, and you saw an opportunity to tear it down and take it for yourself that you’ve jumped at it.

I am sorry this is the path you have chosen to take, Eileen. You are wrong, and you are doing nothing to build community or success in 2014. We have important work to do, and this is not it.

Thank you to those of you still reading, and thank you to all who support me and the work I see as so vitally important to building a more progressive country.

For any questions, I will be happy to answer them as I can. DM me or send me a tweet, repeat if they are missed.

On Friday, March 1st blogger and long time ally of one very angry kitten posted a blog attempting to discredit the evidence I presented here, arguing the date on my “Welcome To Twitter” email did not match the date the account was created and that I had therefore falsified those receipts. While Osborne has yet to post a correction or remove his piece, I pointed out to him that the “Welcome To Twitter” email is sent upon confirming the email associated with the account, not the date the account that it was registered.

I have forwarded the email dated August, 22nd 2011 asking me to confirm the email (I have attached images on page 2), a task I didn’t complete until I had that email resent and did so on the 30th, explaining the date differentiation. Next time I do hope that Osborne is more thorough in his research, and hope he will have the courage and integrity to release a correction. Given the clear intentions of the group pursuing these claims, and shared behavior, I doubt very seriously he will.

His response, sans accountability for his own mistake:

As of March 3rd, 2013, among my most avid accusers, @Karoli, has accepted my evidence and ownership of these properties, and issued a full and clear apology. I thank her for this and assure her that I hold no ill will going forward. We are all on the same team, and fighting the same fight.

tagged with Connect The Left, Simon Cowart, The Cabal, UniteBlue