World Famous Internet Gangster, JoJo, was served April 22nd and has been ordered to appear today, May 20th, in Lee County, Florida.
In addition to ongoing state and federal criminal investigations into his aggravated stalking and harassment of several people, a Rule to Show Cause (why he shouldn’t be held in contempt of court) was recently issued against Camp for violating a Final Injunction Against Stalking over 500 times.

Being a very brave World Famous Internet Gangster, JoJo has been in hiding for months to avoid getting served.

According to the Final Injunction Against Stalking, JoJo was supposed to update his address with the clerk within 10 days…another violation. It won’t be a surprise if there’s a warrant out for JoJo’s arrest by the end of the day.
It also won’t be a surprise if the brave World Famous Internet Gangster, who was diagnosed with Narcissistic Personality Disorder, continues to stay in hiding while continuing to harass and stalk his victims on the internet. 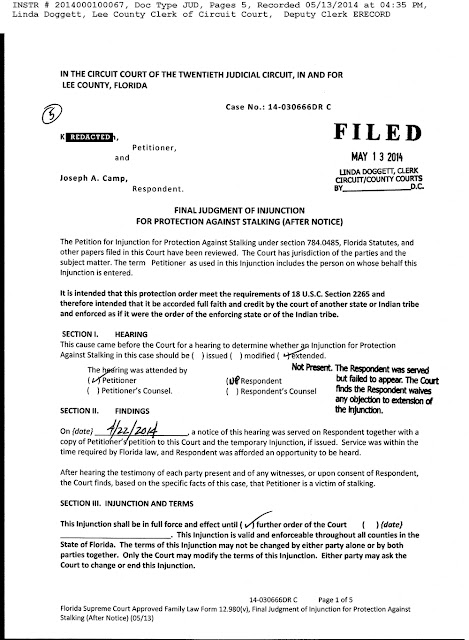