Someone sent me the file below. It seems that the Holy Roller, Jennifer D’Allesandro, contacted Bullyville and offered to give him her email account for some $$$.
The email account would have all her communications with her Kate Gosselin hating friends as well as emails with Neal Rauhauser and most likely Thomas Retzlaff too.

Saint Jennifer was basically offering to sell out her friends for some cash. This might be surprising considering that Jennifer is a devout Christian, very active in her church and she’s written several Christian themed fiction novels.

Saint Jennifer’s brand of Christianity is a special one. It allows her to sit in judgement on Kate Gosselin, to hack websites and to have 5 children by 4 different men while only getting married twice.  Saint Jennifer is holier than thou.

So Bullyville recently published the email where she offers to sell out her friends so naturally now she’s claiming the email account is a fake.

The individual who sent me the following took it step by step to prove that Saint Jennifer is lying (again).

OK class, pay attention. We have an important lesson today. First we’re going to establish the fact that Jenn_Dalessan@roadrunner.com is an email that belongs to Jennifer D’Alessandro of Lockport NY. This is important as it is the recovery email for another email of hers that she is currently denying is her account.

The above is an email from Jennifer D’Alessandro to one of her victims from her Roadrunner.com email address.  This email was obtained via an FOIA to the Los Angeles POLICE DEPARTMENT regarding the investigation into Jennifer’s illegal intrusion into someone’s blog and email. The Jenn_Dalessan@Roadrunner.com  email was confirmed by law enforcement as belonging to Jennifer D’Alessandro of Lockport NY via a subpoena to her ISP.

Additionally, Jennifer has sent out numerous DMCA take down notices both to BullyVille and to other people using the exact same email address. Example of one of these below. 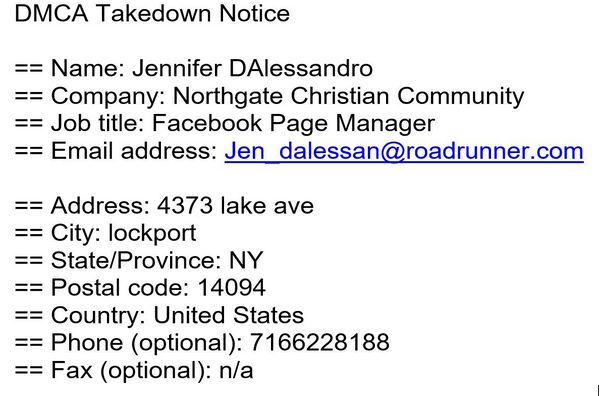 Now on to the next part where Jennifer is denying the JennDalessandro@gmail.com account also belongs to her.  Jennifer sent the following email to BullyVille.

When BullyVille posted the above email with the question of whether or not Jennifer was trying to roll on her friends for money. When Jennifer saw this, she tried to deny the Gmail account belonged to her as seen here. 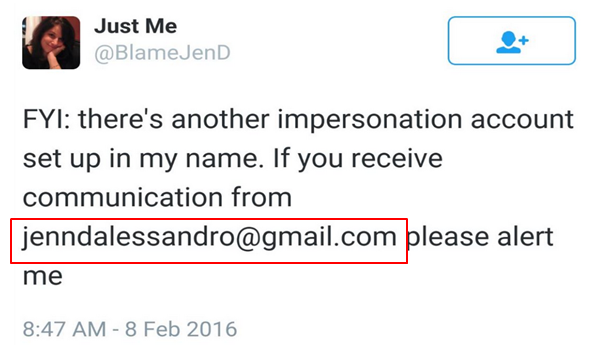 Apparently Jennifer forgot she has used the EXACT SAME GMAIL account numerous times before in other places. One place Jennifer used this Gmail account was on the RWA (Realities Without Apologies) blog. The blog owner ran StatCounter, which also captured the IPs associated with each post as seen here. 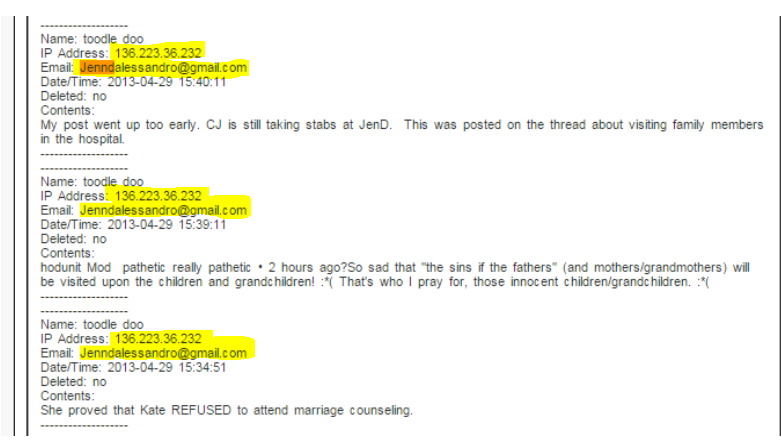 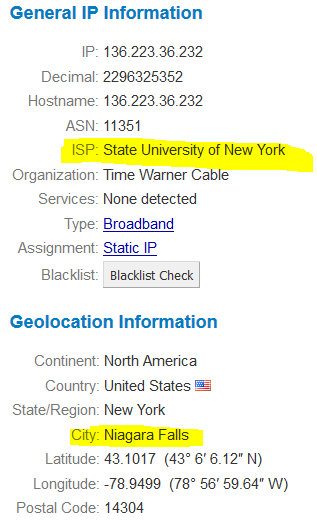 All of the colleges related to State University of New York system SUNY.EDU run on the same domain subnet, including Niagara Community College where Jennifer D’Alessandro works.

Jennifer seems to believe everyone will believe her outrageous lies and ignore the following verifiable FACTS:
(a) a subpoena issued by the LAPD,
(b) by her own admission on Twitter and
(c) by testing the recovery email address feature on Google as follows:

NOTE: Sending a password reset to a recovery email is not hacking. We want to by crystal clear that NO ONE made any attempt to access the JennDalessandro@gmail.com account as part of this verification process. The password reset test was only to verify the recovery email address as seen here. We have a video of the password reset request being sent in case Jennifer attempts to say these screen shots are photo-shopped.

Despite all of the 100% provable facts above that provide irrefutable proof that JennDalessandro@gmail.com is Jennifer D’Alessandro’s email account, Jennifer D’Alessandro continues to lie and insist the JennDalessandro@gmail.com account is an imposter account set up by someone else and that it is not hers.
By her very own tweet below she is verifying that the Jenn_dAlessan@roadrunner.com email is hers.  It makes zero sense that someone would attempt to set up an impersonation account on someone else and use their targets real life email as the recovery email. Why you ask? Well that would allow their target to gain control over the impersonation account (BAD). And since Gmail tracks IPs of anyone who signs into a Gmail account, so this would end up “outing” the person who set up the impersonation account (also BAD). Jennifer’s lies make no sense.

Now that we have provided indisputable proof that JennDalessandro@gmail.com is in fact Jennifer D’Alessandro’s Gmail account, we shall assume she will now try to say it was her account at one time, but she deleted it and now someone else has created a duplicate account. To preemptively shut down that lie, we provide the following from Google’s own support system. Once a Google Gmail has been established, (even if it is subsequently deleted), the user name cannot be reused again by either the original account owner or anyone else.

So there you have it. Jennifer D’Alessandro lies again.

As for her friends and for people like Neal Rauhauser and Thomas Retzlaff, be aware Jennifer has given up information on other people before in attempt to barter for what she wants. How confident are you she won’t roll on you as well?