Posted on November 2, 2016 by Iron Troll Leave a comment 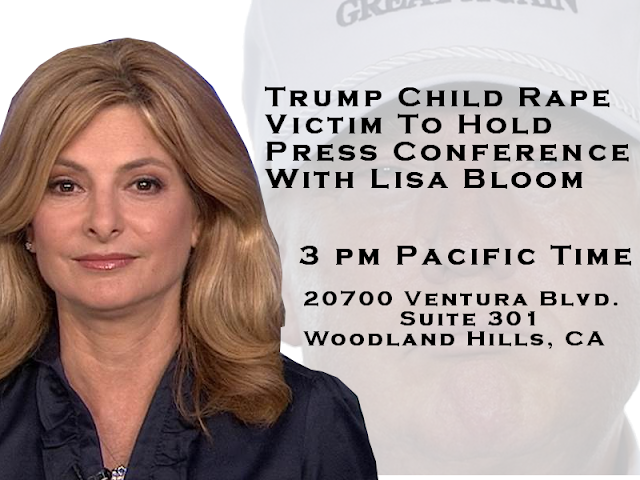 At long last, Jane Doe, the woman who has accused Donald Trump of raping her in 1994 when she was 13 years old, will be coming forward today to hold a press conference concerning her allegations against Trump.

Lisa Bloom ‏@LisaBloom  5h5 hours ago
Lisa Bloom Retweeted Sarah Kendzior
One explanation for why this story has not been covered. That’s about to change.

Jane Doe will appear with attorney Lisa Bloom at 3pm Pacific Time according to the press release below. Rumor has it that the press conference will be covered by CNN and MSNBC.

FOR IMMEDIATE RELEASE
WOMAN WHO SUED DONALD TRUMP FOR CHILD RAPE WILL APPEAR FOR THE FIRST TIME AND SPEAK OUT WITH HER NEW ATTORNEY LISA BLOOM TODAY
More than four months ago a woman using the pseudonym “Jane Doe” sued Donald Trump for a series of sexual assaults that she alleges occurred at parties in New York in 1994. Jane Doe was just thirteen years old at the time. Her operative amended federal court complaint is available here.
The mainstream media has failed to cover the story, though Lisa Bloom posted an article in June 2016 entitled “Why The New Child Rape Case Filed Against Donald Trump Should Not Be Ignored” which has received over one million social media “likes.”
Jane Doe will break her silence today and speak out about her allegations at the following place and time.
The Bloom Firm
20700 Ventura Blvd., Suite 301
Woodland Hills, CA 91364
3pm Pacific Time
November 2, 2016
Contact:
Lisa Bloom’s assistant Marcelino Valencap
(818) 914-7343
Marcelino@TheBloomFirm.com