Where I Become Queen Bullyville, The First Complaint

With Siggy’s publicist raging out of control and attacking bloggers, I figured it’s time to post the complaints and discovery evidence for the complaints filed against me.

Siggy’s publicist, Vinnie Spina, has been using extortionate threats to silence free speech. Last year she got IronTroll blog suspended 5 times in 2 months. The suspensions stopped when I complained of harassment and mentioned Vinnie Spina by name.

This year Vinnie is outdoing herself in crazy. She perverted the legal system by filing 3 harassment complaints against me. She’s been attacking bloggers and gotten several of them to quit.

This is not okay with me. It should not be okay with you.

I realize we’re “just bloggers” but the US Supreme Court decided in Obsidian v Coxx that bloggers have the same rights as the press. Any attack on someone’s free speech, even if it’s just a blogger, is an attack on everyone’s free speech.

I have absolutely no idea how Vinnie and Patrick Spina have managed to stay out of prison over the last decade. I don’t know how Vinnie managed to file 3 perjured complaints in a jurisdiction where she doesn’t live. I don’t know why the municipal court in Paterson is pursuing the complaints against me when the state of Florida will not extradite me.

Many of you have wondered what’s in the evidence against me. Here’s the first complaint filed in April this year. I’ve redacted the complainants name throughout everyone knows it’s Vinnie Spina.

As my faithful readers know, Vinnie ran for public office last year in Fort Lee. She’s a member of Fort Lee GOP and was their fundraiser last year. She’s been a resident of Fort Lee for decades, but for some reason she filed her complaint in the neighboring city of Paterson.

The redacted address is not hers. It’s actually the address of former police officer, James Durkin, a former client of hers before she was disbarred. Durkin has a golden oldies band and is currently a client of Vinnie’s PR firm.

For those of you who have followed Vinnie’s shenanigans over the years, Durkin is a former president of the New Jersey Honor League where Vinnie and Patrick got the vanity plates for their vehicles.

Now I’m no lawyer but I don’t think you’re supposed to use a false address to file a complaint in the wrong jurisdiction. Yet the complaint was accepted and probable cause found without anyone asking for verification of residence.

You’ll see in the complaint below that she accuses me of being many people. For the record, I am not James McGibney, the owner of Bullyville.com. I am not Grace Alexis, the owner of QueenzOfMedia.wordpress.com.

I have no control or influence over the content posted on Bullyville.com or QueenzofMedia.wordpress.com. I do not have access to, and thus have never logged into, the admin sections of these sites.

I do make frequent visits to both sites though. I like to see what James digs up on assorted bullies and villains, and Grace has so much information about the Faux Reality drama on her site that I use it as a reference.

I am also not @Lexie_Blue, @ErikEggstrada, @Cyco, @KarmaDroid, @Teeth404, @PatrickJohnSpina, or @Porco as claimed in the complaint. I had no influence over what these accounts posted and I’ve never logged into any of these accounts or had passwords to do so. Most of them I never heard of until I read the discovery materials.

Vinnie claims I sent lewd images in an email I sent to many people in New Jersey. This was another lie. No images were sent.

I never claimed to be posting wanted posters anywhere and I don’t have any troll accounts, let alone any using pictures of Vinnie and her husband as their avatar.

In the discovery material below I added comments about each piece of evidence she submitted. Pay particular attention to the email I sent that she includes. Vinnie altered it, omitting half the email. Again, I’m no lawyer but I don’t think you’re supposed to tamper with evidence used in discovery.

To shorten this post I omitted several pages of the complaint form which had nothing entered on them.

Below is the complaint written by Vinnie in long hand. She put in writing that I sent “lewd images” to all Republican Club Members. No pictures were included, the email was sent to Republicans, Democrats, elected officials and journalists.

The discovery for the case against me wasn’t submitted until after the first hearing, a month after the complaint was filed. The letter below was included with it.

Her last sentence is a hoot. Her address is a matter of record and she knows I know it. She didn’t want me to see that she used a fake address. There’s already a vinniespina.com domain for a couple of years now where James McGibney information about Vinnie so her warning is really just a covert way to make me seem like someone very scary.

James doesn’t consult with me on what domains he purchases and he doesn’t own any domains in the names of judges or opposing counsel in California or Texas. Vinnie lies again.

In this letter Vinnie again claims I’m queenzofmedia.wordpress.com and assorted accounts on Twitter. @Lexie_Blue submitted documents to the court so Vinnie knows she’s not me. Vinnie also knows I’m not @Cyco, she posted his dox on her trolldox site. She’s no longer claiming I’m Bullyville but still says I’m queenzofmedia.wordpress.com which was not suspended and is still very much intact with all the tea on Vinnie.

Exhibit A is a list of allegations against me. Keep in mind the discovery was submitted a month after Vinnie filed the complaint, her story has changed.

In #1 Vinnie now claims the infamous email contained a link to a lewd and obscene photoshopped picture instead of an actual picture.
#2 The email wasn’t sent to Vinnie and the links it contained were to court documents. She included the email in discovery but she cropped the links off along with editing out half the email.
#3 Fair Use doctrine allows me to use a still shot which comprises 1 second out of a 39 minute video. My use doesn’t deprive her of income or royalties from the video. In any case, DMCA violations don’t belong in a harassment complaint.
#4 Wasn’t me.
#5 I don’t know who Vinnie’s business associates are other than Siggy and Dolores Catania. I contacted them on March 24th to warn them about Vinnie. Siggy blocked me at that time.
#6 Wasn’t me.
#7 Freedom of Speech. Vinnie is what’s considered a limited purpose public figure so I am free to comment about her. My “outlandish accusations” are substantiated with court documents. Vinnie was outed as Faux Reality before I blogged about her.
#8 Wasn’t me. I don’t have Vinnie’s Social Security Number and was not “involved” in posting it online. 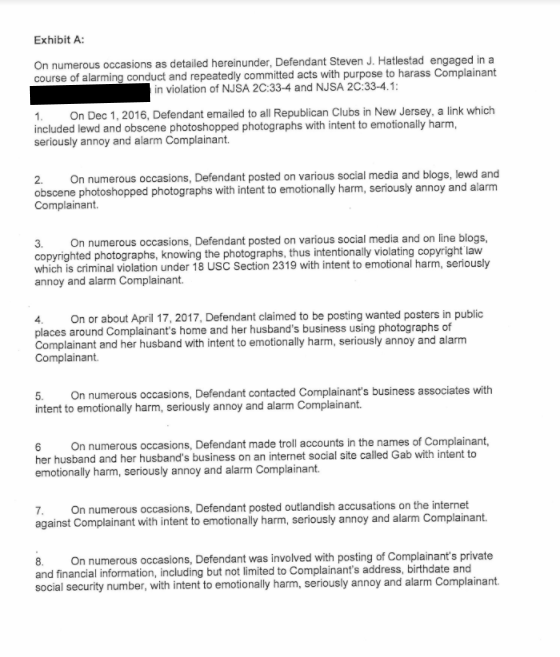 Exhibit B is the registration for irontroll domain. 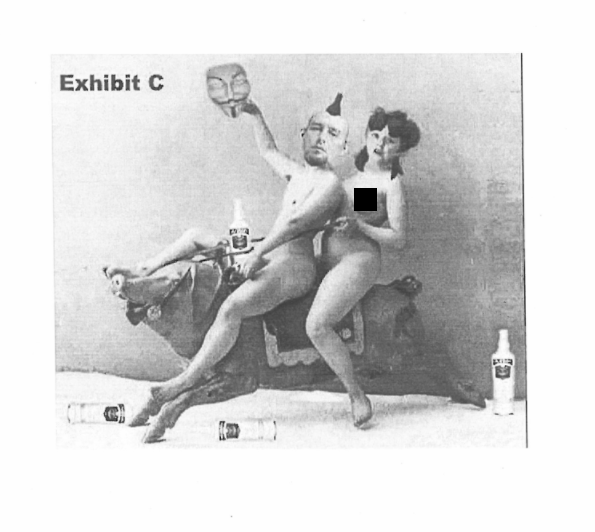 Exhibit D is her copyright for the Terlingua Preservation Society video that was used for years to prove the voice of Vinnie Spina and Faux Reality aka Vinnie Spina is the same person. The video was shot in 2013, Patrick registered it 3 years later in 2016.

The DMCA complaints they’ve been sending out are bogus and would not stand up in a court of law. Owning the video copyrights does not mean they can stop someone from using a still shot from the video for public commentary. 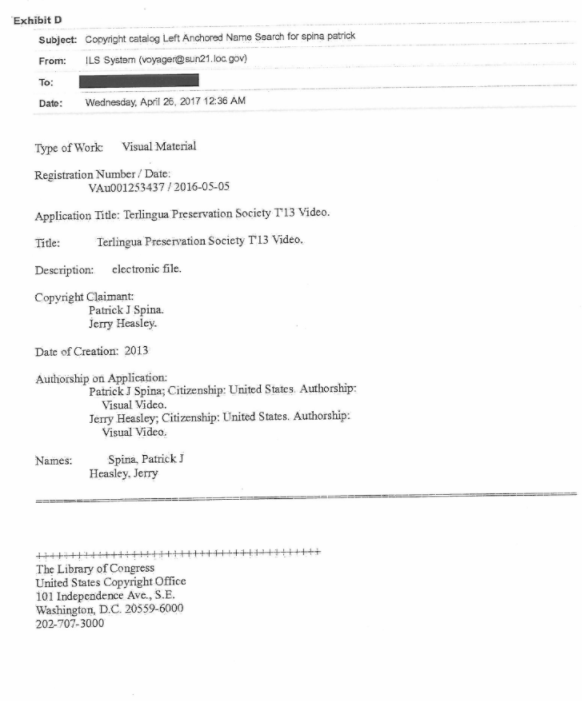 Exhibit E is the infamous email. Vinnie edited out 9 paragraphs. This was not by accident since it’s paragraphs 3-11 that are missing.

At the end of the email there were 8 to court documents supporting my statements. Those were cropped off which is funny. In her discovery, Vinnie changed her allegation that lewd images were sent in the email to claiming that I had links to lewd images but she cropped all the links off the email.

You can verify this, I posted the email on irontroll the same day I sent it last December, here. I also have the original email and returned emails that bounced back as undeliverable. 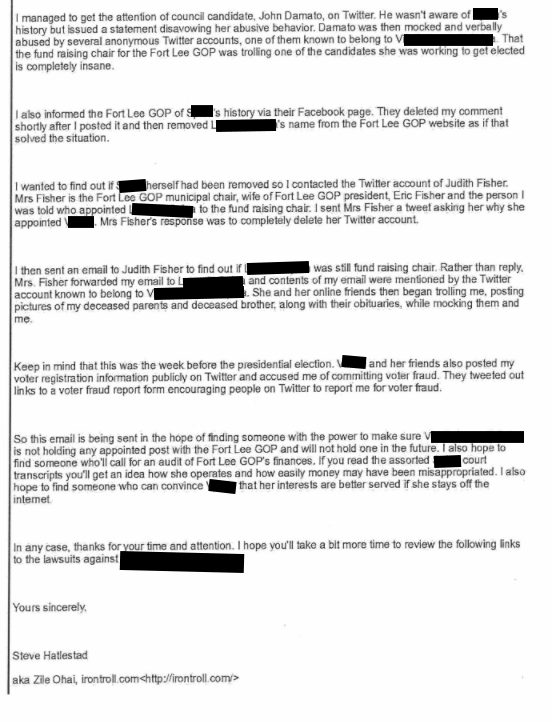 Exhibit F. This is the tweet that contained a link to the photoshopped picture of Vinnie on a pig. The picture was posted in response to being called a revenge pornographer. 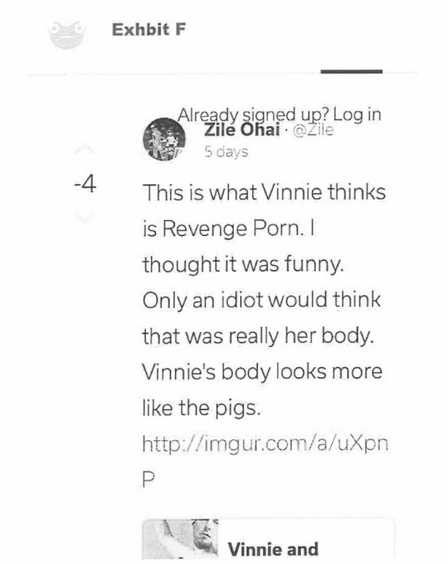 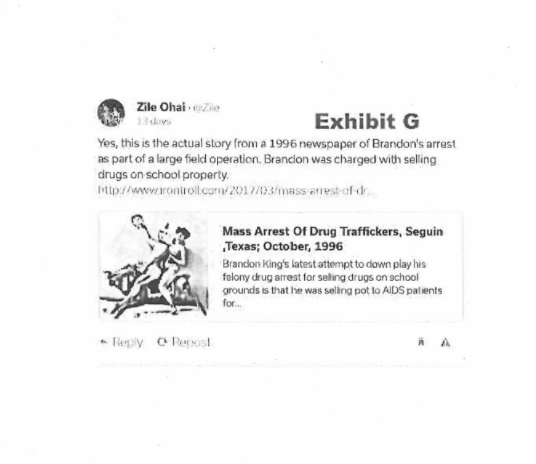 Exhibit H.Vinnie accused me of violating her copyright but never provided me with documentation that she owned. it. I had no reason to believe that she’d copyright an amateur video 3 years after it was created. 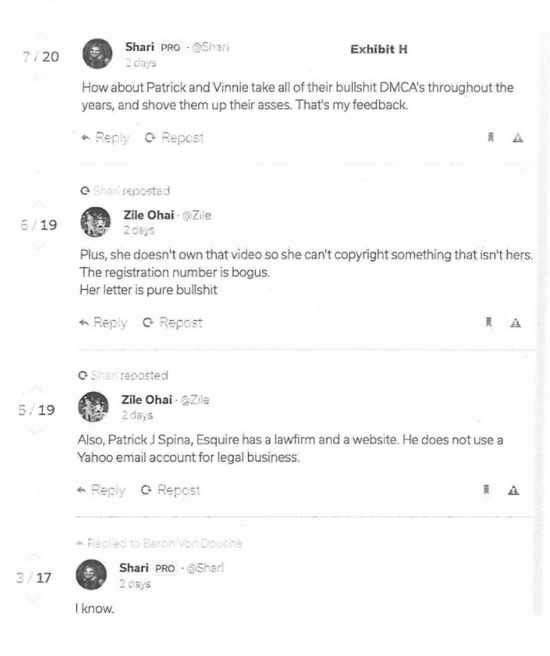 Exhibit I, Vinnie can’t prevent me from blogging or posting a tweet linked to a blog post. 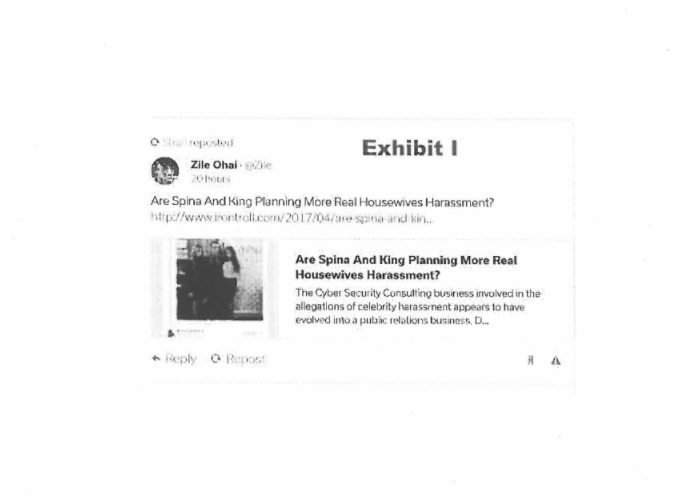 Exhibit J. Once again, a constitutionally protected blog post and I tweeted it out. Free speech. 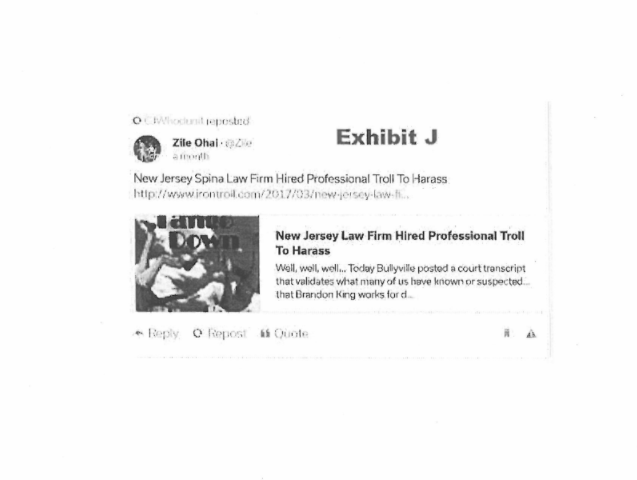 Any letters or emails sent from the Spina Law Firm between 2013 and 2016 with John Palmisano still listed as in counsel were sent by Vinnie posing as an attorney.

Exhibit L. Tweeting a blog post with a cartoon parody is not a criminal act. The drug bust article in the tweet was about Vinnie’s employee, Brandon King. 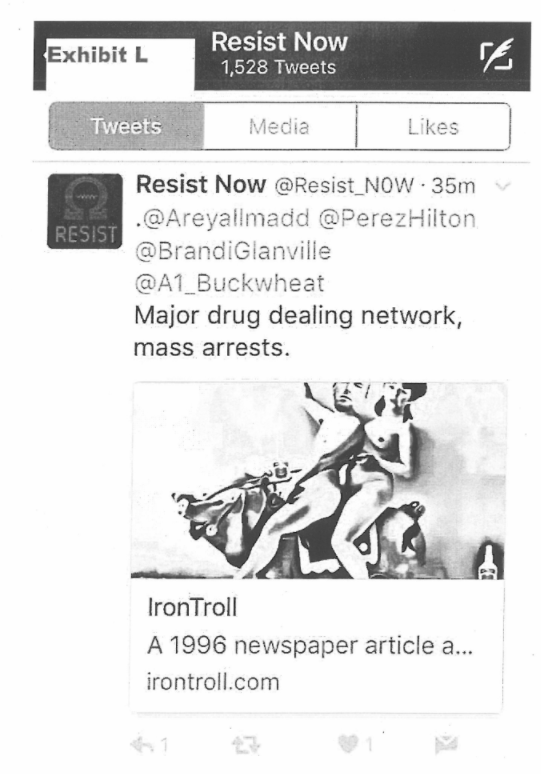 Exhibit M is parody picture of Vinnie, it’s considered free speech. The tweet was part of a series of tweets where I was trying to warn Real Housewives Siggy Flicker and Dolores Catania about Vinnie. 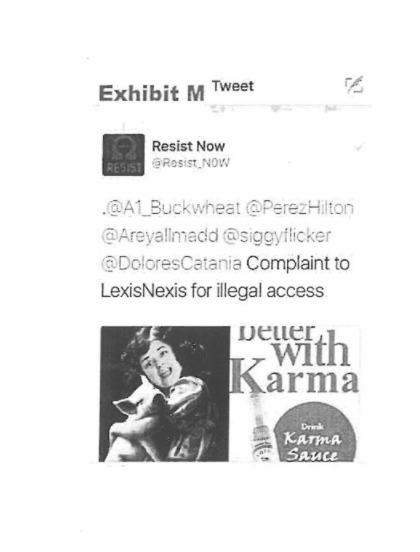 Exhibit N. karmadroid isn’t my account. I never heard of it before seeing it in discovery.

Exhibit O. ErikEggstrada is not my account. The account posted pictures taken in New Jersey. I’ve never been to New Jersey.

Exhibit P. Still not me. This must be a picture of Patrick’s Shelby Mustang but it has nothing to do with me. Vinnie used the alias Antonella Mollica online, Danny was the name of her imaginary boyfriend who owned a Shelby identical to Patrick’s.

Exhibit Q. Blog posts are protected under free speech. Writing about Vinnie is not harassment. In light of recent events, I was right about the harassment.

Exhibit R. Parody again. The law assumes the public has the intelligence to determine that Vinnie is not really a witch with green skin. The pictures promote irontroll blog.

Exhibit S. Not my accounts and never heard saw them before the discovery.

That’s the end. There are still two more complaints with more discovery and more people added who Vinnie claims are me.